Students from the Maggie Allesee Department of Theatre and Dance theatre program met with legendary actress, comedian and Detroit native Lily Tomlin. The students, recipients of the Lily Tomlin Endowed Scholarship Fund in Theatre, enjoyed a conversation with the multifaceted entertainer prior to a performance with fellow actress Jane Fonda on Wednesday, Oct. 30, at Detroit's Fox Theatre. 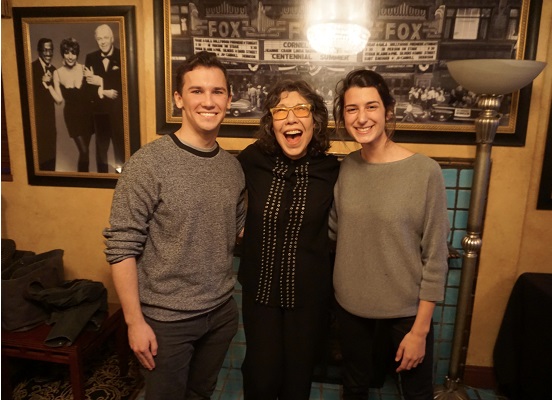 Students Tori Miller (B.F.A., acting) and Nikita Krylov (B.F.A., acting) had the opportunity to thank Tomlin for establishing the scholarship. They described the ways the fund has provided opportunities to pursue their academic endeavors and create building blocks toward their future careers.

"It's cool to see the Detroit in her is still hanging around," said Miller. "I can't believe she took the time to meet us and listen to what we had to say and what was going on in our lives."

Tomlin started her career as a stand-up comedian and an actress, performing Off-Broadway during the 1960s. She is known for roles on television shows such as Laugh-In, films such as Nashville and Nine to Five, and her Tony Award-winning Broadway show The Search for Signs of Intelligent Life in the Universe. She and Fonda currently co-star on Netflix's Grace and Frankie.

Tomlin reminisced with the students about her time as a student at Detroit's Cass Technical High School, her days performing at the Mackenzie Union as a theatre student at Wayne State and her humble start in the industry. She even shared a few stories about her life that she used as material for some of her earlier work.

"Lily Tomlin is such a genuine and down-to-earth person. She is so welcoming that I could have talked to her for hours," said Krylov.

College of Fine, Performing and Communication Arts Dean Matthew Seeger, who accompanied the students, shared future plans of the Gateway Performance Complex with the former Bonstelle theatre student and discussed how this expansion will enrich the educational experience for current and future performers.

"Lily Tomlin is a gracious, accomplished icon of American theatre," said Seeger. "She is a true Detroiter, down to earth, accessible and very funny. We are proud to have her as part of the CFPCA family."