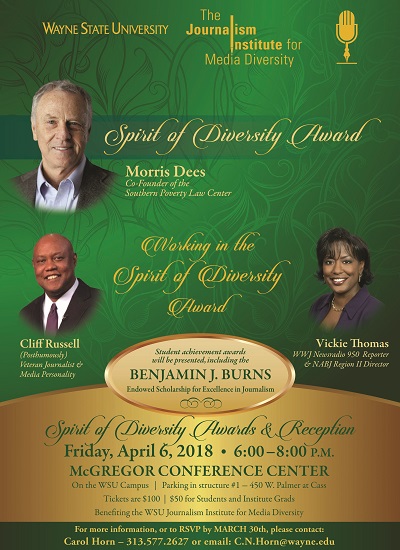 DETROIT, Mich. – Each spring the College of Fine, Performing and Communication Arts’ Journalism Area of the Department of Communication bestows the Spirit of Diversity Award on a journalist whose professional contributions have been national in scope and have advanced the cause of diversifying issues covered in America’s news media.

Past recipients of the national Spirit of Diversity Award have included:

Equally as important, journalists at the local level are also honored with the Working in the Spirit of Diversity Award. This year, we are honoring WWJ Newsradio 950 Reporter and NABJ Region II Director Vickie Thomas, and the late journalist and media personality Cliff Russell. These outstanding individuals are celebrated for reporting on issues that matter to this community.

Additionally, this event is a fundraiser for Wayne State’s groundbreaking Journalism Institute for Media Diversity, which was founded in 1984 by the Department of Communication and editors of The Detroit News and the Detroit Free Press. Nearly 250 graduates of the Institute have launched professional careers at metro dailies, radio and TV stations, public relations firms and other media organizations across the nation. Some graduates have moved on to careers in law, politics, civic and charitable organizations, and as award-winning authors and documentary producers.

Morris Dees co-founded the Southern Poverty Law Center in 1971 following a successful business and law career. After launching a law practice in Montgomery in 1960, he won a series of groundbreaking civil rights cases that helped integrate government and public institutions. He also served as finance director for former President Jimmy Carter’s campaign in 1976 and for Democratic presidential nominee George McGovern in 1972. Known for his innovative lawsuits that crippled some of America’s most notorious white supremacist hate groups, he has received more than 20 honorary degrees and numerous awards. Those include Trial Lawyer of the Year from Trial Lawyers for Public Justice, the Martin Luther King Jr. Memorial Award from the National Education Association and The Salem Award for Human Rights and Social Justice.

Vickie Thomas is the City Beat Reporter for WWJ Newsradio 950. Thomas graduated from Wayne State University, cum laude with an honors degree in broadcast journalism. Her academic career included interning in Congressman Louis Stokes’ office on Capitol Hill where she was instrumental in getting commemorative legislation passed honoring Olympic Gold Medalist Jesse Owens. Thomas joined WWJ Newsradio 950 in 1991. Throughout her radio career, she has earned awards from the Detroit Press Foundation, the Michigan Association of Broadcasters, the Michigan Associated Press and the National Association of Black Journalists. She also has received the national “Gabriel Award” from UNDA-USA for the WWJ Black History Month Series “The African-American Church: The Heart and Soul of Metro Detroit’s Black Community.” Thomas is a member of the National Association of Black Journalists, and started a scholarship and internship program for college students interested in the field of broadcast news, while serving as vice president of the Detroit chapter. She also enjoys visiting local schools for Career Day to talk to students about her job and give them advice on what they need to do to break into the business.

Cliff Russell who died in February, was a news anchor, political analyst, sports commentator and columnist in the Detroit area for more than 35 years. He became the City of Detroit's first African-American Press Secretary, appointed to the position by former Mayor Dennis W. Archer in 1994, and hosted "American Black Journal" on Detroit Public Television for several years. In December 2002, Russell was named senior director of Communications for the Detroit Tigers, the first African-American to hold the position in Major League Baseball history. Russell also worked at a number of local radio stations including WJR, WDET, WJZZ, WCXI, CKLW, WWJ, WCHB, WQBH and 910 AM WFDF Radio where he was hosting “The Cliff Russell Show” until his death.

Russell, a Wayne State graduate, was inducted into the WSU Athletic Hall of Fame in 2007.

For more information about the Department of Communication's Journalism Institute for Media Diversity, visit comm.wayne.edu/diversity-institute.