12th and Clairmount will show at the Traverse City film festival on Sunday, July 30. Check out the lineup here. 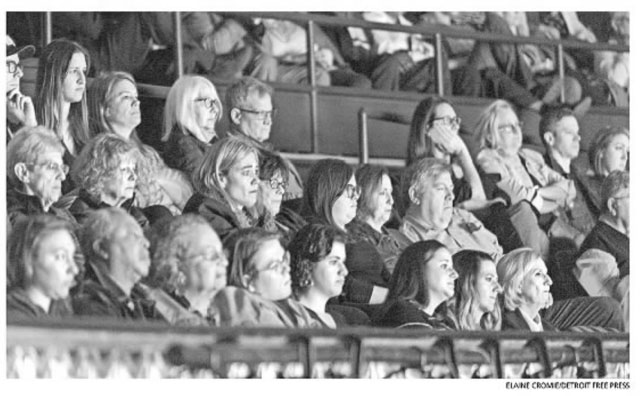 Throughout the semester, Mannino, Holdwick and Serwinek spent time each week in the offices of the Detroit Film Theatre (DFT) at the Detroit Institute of Arts (DIA). Their job was to catalog and code incoming (donated by individuals) home movies for screenings at the DFT and, subsequently for 12th and Clairmount. They also learned how to operate the projectors, and, as a group, the four looked into “home movies as visual memory,” specifically in regards to socio-cultural articulations.

In addition to weekly screenings of selected home movies at the DFT, specific clips were incorporated into 12th and Clairmount, the Freep-produced documentary film. McDevitt, Mannino, Holdwick and Serwinek all received screen credit.

McDevitt serves on the Executive Board of Directors for the Friends of the Detroit Film Theatre. This year, the DFT once again collaborated with others for the Freep Film Festival. The focus for 2017 was a commemoration of the 1967 Detroit Rebellion. The students were instrumental in sorting through the many reels of donated films. Their immediate supervisor was Larry Baranski, Director of Pubic Programs at the DIA.

“It was so exciting to see their efforts on-screen. I know the work of cataloging and coding can sometimes be very tedious, but it quickly became clear the project was worthy of the endeavor,” said McDevitt.

Mannino expressed, that documenting the home movies gave her a more realistic timeline of the sixties and that they are not far away from where we are today.

“The project is critical for current and future generations to be able to see that rebellion is what we face now . . . we need to look to the past for answers about our future,” said Mannino.

“Sitting-in on the weekly screenings of home movies at the DFT was incredibly rewarding,” said Mannino. “The audience would create a ‘soundtrack’ for the silent films. There would be audible reactions of visceral joy, gasps and whispers about family members.”

Serwinek explained that receiving the reels from a single family gave her a chance to get to know them without meeting them.

Holdwick, who has since stayed-on at the DIA to continue his work, added that he enjoyed working with a variety of equipment, including 8mm cameras.

“I actually spent a day UNDER the theatre stage, combing an 8mm library for news footage,” said Holdwick.

New screenings of 12th and Clairmount have been scheduled at Cinema Detroit. For more information, visit freep.com.