For the first time in Wayne State University’s history, a project has been named a finalist for the Student Academy Awards. Darryl Shreve’s (M.A., 2017) documentary Free The Wall is among seven finalists for the honor, which will be announced on Thursday, Oct. 12 at the 44th Student Academy Awards presentation in Beverly Hills, California. Shreve is a graduate of the Department of Communication in the College of Fine, Performing and Communication Arts. He currently works as the associate director for Wayne State’s University Television, which recently, in collaboration with CFPCA, received a Michigan National Academy of Television Arts and Sciences Emmy award for the college’s “Be Inspired” recruitment video. 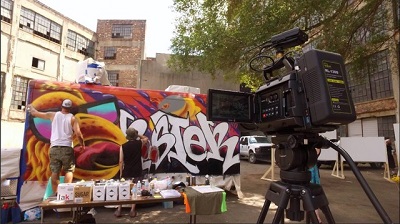 The documentary addresses three research questions: Is graffiti art? Is it vandalism? What are communities doing to resolve related conflicts? It chronicles the experiences of six street artists while simultaneously delving into the subject’s history and future. Interviews were conducted with business owners, police officials, street artisans, muralists and fine art coordinators across several states. Free The Wall explores freedom of expression and how art can give a voice to the voiceless. The film discusses the counterculture nature of street art and its evolution into various art forms that now attract mainstream audiences.

“As an artist at heart, I have always been drawn to visual mediums of expression,” stated Shreve. “When I started in the film/video industry, I merely swapped a paintbrush and canvas with a camera and editing software, so covering a topic like graffiti felt more like a homecoming.”

The Student Academy Awards was established in 1972 to support and encourage excellence in filmmaking at the collegiate level. Past winners have gone on to receive 46 Oscar nominations and have won or shared eight Academy Awards. Recipients include John Lasseter, Pete Docter, Robert Zemeckis, Trey Parker and Spike Lee.

Shreve said that Department of Communication Media Arts and Studies Associate Professor Kelly Donnellan provided valuable tips on the latest audio techniques and was of great assistance in her advisory role on the project. Shreve said he was both humbled and honored when he discovered Donnellan had submitted the piece to the academy.

“When Darryl proposed his thesis project on graffiti and street art, it was such a visual topic, I could totally ‘see’ the film that he wanted to do,” said Donnellan. “Darryl was motivated to do the best work possible on the film, and he was a joy to work with. He did a masterful job of shooting the project and crafting the story in the editing room. Free The Wall is a really well executed film. He should be very proud of it. I know I am.”

The documentary was shot primarily in Detroit, Philadelphia and Toledo, Ohio. The Mural Arts Project in Philadelphia, the Mural in the Market program in Detroit and the Young Artist at Work program in Toledo provided a rich backdrop for film’s content.

“It’s a huge honor to make it to the final round of the Student Academy Awards and I feel privileged to represent Wayne State University in that endeavor,” said Shreve. “I had a great deal of practical experience in the field of production before pursuing my master’s, but not much theoretical. Going back to school removed the blinders from concepts and theories that I most likely would not have discovered on my own. I believe our educational journey doesn’t end with that first piece of paper, but that we must constantly redevelop and in some cases reinvent ourselves.”

Additional details about the Student Academy Awards can be found at www.oscars.org/saa.